Reachability failure is a very generic term for any support engineer until He/She digs deeper to find out the root cause of the failure condition. In this blog, my aim is to highlight a design scenario with the feature when enabled could lead to NSX Edge internal interface not respond to ping.

As per below diagram Transit VXLAN segment connects two ECMP edge node and DLR together. Internal interfaces of the ECMP Edge nodes and DLR Uplink share same IP address subnet space (Part of one broadcast segment) as depicted in below diagram:

In this scenario Support Engineer trying to reach the Internal interface of an ECMP Edge Device from Outside network (Say HOL control centre) and ping fails.

In routing world when we have multiple paths to reach specific destination router always choose the best path in case those paths are not equal and would load share using hashing algorithm if the destination is reachable via two or more equal paths.

With multiple NSX Edge running in ECMP mode, routing is always asymmetric in nature which means to reach the destination IP address path may choose Edge 1 for North-South communication and return/outgoing path from South-North may choose Edge 2. Due to this reason, we do not run Stateful services on ECMP Edge nodes.

In the current design, Data Center fabric is running ECMP Leaf and Spine Architecture, hence path chosen to reach the destination is random (Based on Hash Algo used in Fabric). In the present scenario support engineer found that path taken by the packet is as follows:

So routing is doing its perfect job, but now what is the reason for the failure?

When you closely look at the configuration of the Internal Interface on NSX Edge E1 you find that Reverse Path Filter feature is Enabled as shown in the screen capture below which is causing the packet to drop. Alright, but what is this feature doing or is it really important to be enabled? 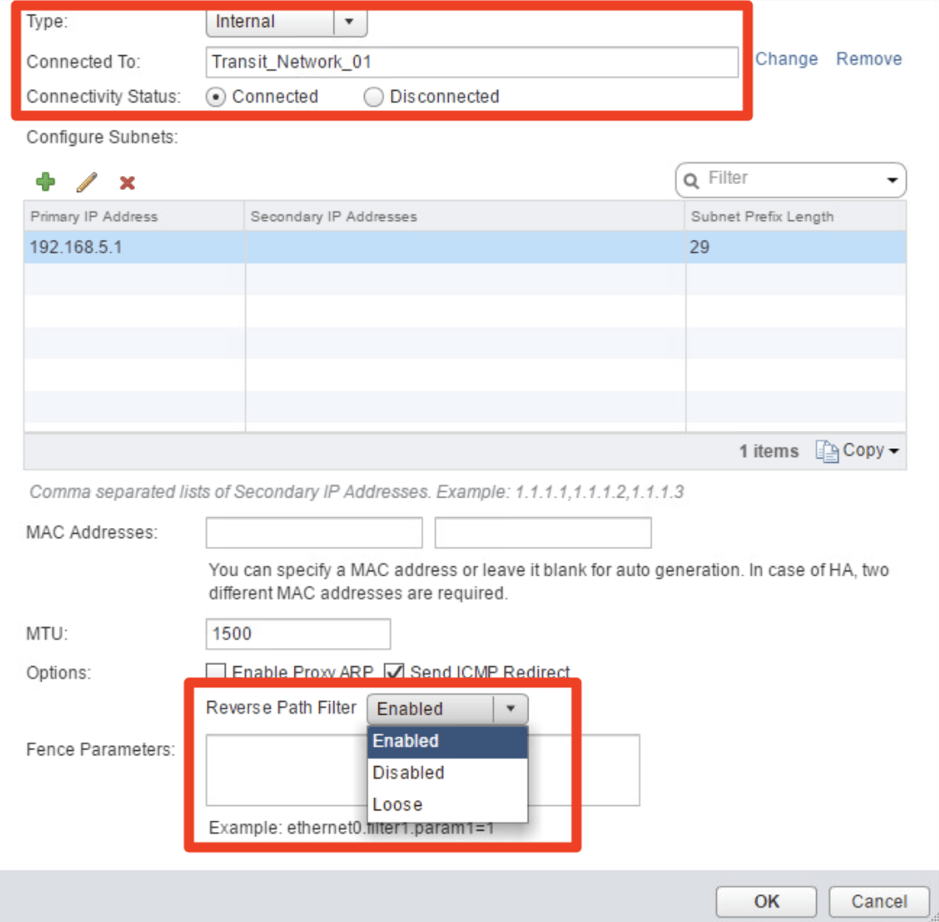 Let spotlight what this feature means and why is it important?

Reverse Path Filter is also known as Unicast RPF (Reverse Path Forwarding), is actually a security feature to limit the malicious traffic inside Data Centre network. When this feature is enabled, Edge starts verifying the reachability of the source IP address of the packet received for forwarding / Routing. How it does is, it checks the routing to the source IP address or subnet (Source from which packet was received) and verifies the outgoing interface through which the source IP subnet can be reached. It will simply discard the packet and not route in an instance Edge finds Source of the packet can be reached via X interface but received the packet from Y interface for routing. This security feature capability limits the appearance of spoofed addresses on a network.

We know what Enabled means and Disabled would turn down the feature. Third option Loose is definitive enough by its name, it’s loose and not aggressive enough to perform full due diligence. Hence it performs a single function, can Edge reach received packet source IP address subnet from any of its interfaces whether upstream or downstream, if the answer is “YES it can” Edge will route/process the packet.

It is not recommended to disable Reverse Path Filter as it helps in fighting malicious traffic within DC fabric.